How to Identify & Deal with Psychopaths

“Taming Toxic People – the science of identifying & dealing with psychopaths at work & at home” is a must-read for everybody living in western society. This book answers a lot of questions my husband and I have been asking for years.

These are 3 lessons learned whilst reading and discussing David Gillespie’s riveting book titled, “Taming Toxic People – the science of identifying & dealing with psychopaths at work & at home”.
1. Psychopaths are Subtle
If you think you’ve never come across a psychopath, think again. Forget the image of a sex crazed knife wielding serial killer, psychopaths are much more subtle and Gillespie gives us the tools to easily identify them. According to Gillespie, everyone knows at least 1 psychopath. Therefore everyone needs to read the book, unless they’re a psychopath, of course.
2. Serial Bullies are Psychopaths
According to “Taming Toxic People” employees can expect to be bullied by a “normal manager” every six weeks but if your manager is a psychopath you can expect to be bullied once or twice per week. Not great news for corporations as sick leave sky rockets. Gillespie gives readers the tools to deal with the psychopaths in your life.
3. Social Media is their Hunting Ground
The introduction of social media to the masses in 2010 has been the biggest coup for psychopaths. It gives convincing charmers a nightmarishly easy way to stalk their prey and groom them so that the victim feels confident when they meet up in real life. Psychopaths post self aggrandising propaganda for their victims to see whilst being able to stealthily find out vital information on the victim which will be used in manipulations.
Watch an Interview with a Psychopath
Want to see a real life psychopath in action?  Check out acclaimed criminologist, Professor David Wilson’s gripping documentary, “Interview with a murderer”, where you can witness the stark difference between the behaviour of the convicted murderer, Bert Spencer, and other ordinary folk including the Professor. 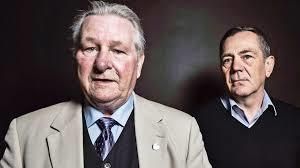 PHOTO: INTERVIEW WITH A MURDERER