Kostya, played by Kostyantyn Mokhnach, a much in demand 50-year-old professional photographer, experiences a midlife crisis after his father is paralyzed by a stroke and his girlfriend/assistant, played by Kateryna Molchanova, above, leaves him.

At work Kostya is quite proficient, and ever the artist even creates theatrical sets as backdrops for his own works. With a wide variety of assignments, he is surrounded by happy people celebrating special moments in their lives such as lavish weddings and elaborate children’s Christmas parties, including well heeled clients who hire him to document their prized art collections. 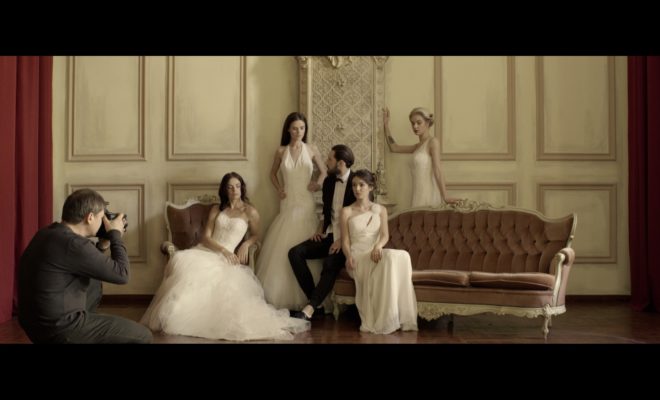 Before Kostya appears (far left) the film opens with members of this elegant wedding party silently taking selfies and posing for each other. (Photo Courtesy of Odessa IFF)

Kostya is turning 50, and his world is on lock down, represented by the state of his disheveled basement, a trash heap of his personal history. Despite our protagonist’s bald spot (much in view because the film is shot mostly from behind him) Kostya feels emotionally immature and stunted as he dramatically loses everything he once cherished.

The very last scene emits a shred of hope as Kostya uses his skill as a rock climber one beautiful early spring day to climb out of a deep and ancient cistern meant to hold water and manage floods. Is Kostya at a turning point? Will he continue to be overwhelmed by unmanageable emotions and experiences? I am inclined to say our hero on the sidelines will get out of his own way, come out of the dark and into the light, better able to cope with his despair and enter the joys of life so readily available to him.

Co-star Kateryna aka Ekaterina Molchanova shines in “Black Level.” Made on a very small budget, Vasyanovych cast Kostya, in his large screen debut, and his real father in the film alongside a roster of other non-actors captures the sense of heaviness and a muted reality when depression hits. An incredibly touching scene occurs when Kostya rigs a rope system to swing his dad from a tree while seated in his wheelchair. The only dialogue we hear occurs between Kostya imitating the chirping of a bird to catch the attention of his cat. Distributed by Kino Lorber, it is hard to say when this film will come to a theater near you. That said, catch it if you can.