Youth Need to Be Heard

I tested positive for HIV three years ago. After my test, I went to see the doctor about starting on antiretroviral treatment (ART). When I entered the door of her office, she said, “Don’t come next to my desk. Stand by the door.” When I told her that I was 18 years old, she said “You girls do not use condoms these days. That’s why you are going to get AIDS at a very young age. You are going to die.”

It was horrible. I cried. I thought that I would be in a safe place at a health facility.

That experience motivates me to empower other young people living with HIV. Now I work as a peer counselor for the Elizabeth Glaser Pediatric AIDS Foundation (EGPAF). In Lesotho, we are called youth ambassadors, which is a paid position, unlike official EGPAF ambassadors.

Because I’m an adolescent, I can connect very well with other youth. With me, they have that opportunity to be open and be free.Dee Mphafi

Lesotho has the second highest prevalence of HIV in the world right now, and sadly, most of that percentage is adolescent. Adolescents are dying of AIDS right now in my country.

Because I’m an adolescent, I can connect very well with other youth. It’s not the same as when someone old talks about HIV to an adolescent. With me, they have that opportunity to be open and be free. We get to have a great conversation with each other and understand each other well.

Much of my work centers around HIV services at an adolescent corner at the Queen Elizabeth II Hospital in the Maseru, where I am a peer counselor. We provide a safe and friendly environment for adolescents to open up. We try by all means to not be judgmental.

This work has helped me be open about my own HIV status. I speak publicly to groups about HIV issues and was featured in an article in the Lesotho Times last year. 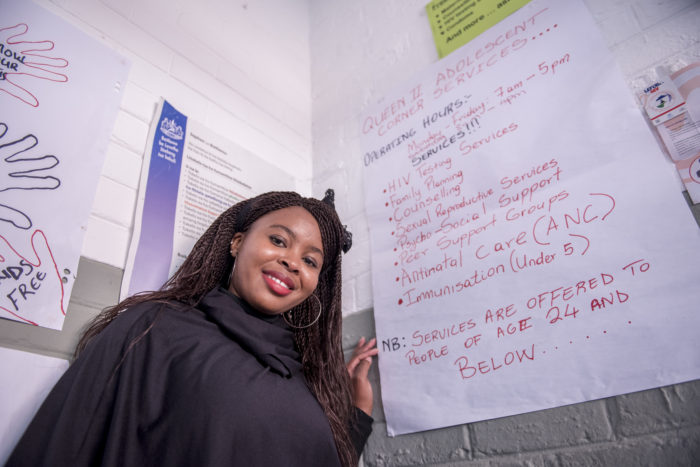 I thought that the article would cause negative reactions. But it actually gave people a reason to get tested. I know that most of my friends went and got tested after the article came out.

At the Queen Elizabeth II Hospital in the Maseru, where I am a peer counselor, we provide a safe and friendly environment for adolescents to open up. We try by all means to not be judgmental.

I’ve also had the opportunity to also share my experiences on a global stage and talk about what Lesotho is doing to end new HIV infections in children and youth.

Earlier this year, I was given the incredible opportunity to represent EGPAF at the International AIDS Society Conference in Amsterdam, where I had participated in panels and presentations about peer support groups and adolescent programs in Lesotho.

In September, I participated in a series of public forums in the United States. First, I attended the United NationsGeneral Assembly (UNGA) meetings in New York. I was included in a roundtable discussion at which we discussed how EGAPAF is working to create an AIDS-free generation, including sharing information through youth-friendly “edutainment”—which is mixing health education with entertainment

I also spoke at a “Movement Makers” event sponsored by Global Citizen and Johnson & Johnson. I told HIV stakeholders about the challenges of young women and girls living with HIV in Lesotho. I told them that we need to help them build their self-esteem and confidence to have hope for the future. I also listened to first-hand stories from other youth from around the globe who are changing their communities—from individuals who survived rape and trauma to those who struggle with depression. I was moved by their experiences and their resilience.

Finally, I came to Washington, D.C., where I visited my colleagues at the EGPAF headquarters. While I was there, I visited the Children’s National Health System, where I learned about HIV programs for youth in the United States, and I interacted with an American young woman living with HIV.

What will stay with me is the one-on-one session I had with a patient who has been on ART for 10 years, but still has not accepted her status. She feels all alone as her parents are HIV negative.

My experiences in Lesotho and around the world reinforce my belief that youth need to be heard. I want to empower more people, especially young women. I need to see more women be brave and stand for themselves and stand for their health.

Follow us here and subscribe here for all the latest news on how you can keep Thriving.

Stay up to date or catch-up on all our podcasts with Arianna Huffington here.