Never Say Die, Nothing is impossible

Story of feet artist — who has only one functional foot.

Growing up from poor family in Majouri Village, a small town of Jammu and Kashmir in 1979. Uttam was declared 60% handicapped with non functioning hands and right leg. But his parents brought him up with love and care and educated him to the best of their capability. When Uttam’s father took him to the local school, many of the villagers told him that it was of no use as Uttam would not amount to anything without his hands and one foot. However, Uttam and his family decided to take this as a challenge and show the world what he was capable of.

With great difficulty Uttam started holding the pencil with his left foot supported partially by a dangling hand. One of his primary school teachers recognized his skills in art and encouraged him. From that time he started sketching, drawing and painting with his foot. As he started gaining in confidence, he decided to prove to everybody around him that “He too can live like a normal human being and is capable of doing the things that any abled person can do”. He was determined to prove himself and started to put in hours of hardwork into improving his artistic skills.

After passing his 12th class, Uttam participated in many Art exhibitions and public Art shows in and around the state, bagged many citations, awards and appreciations from Government and non-government organisations. Gradually people started recognizing his talent and supported him. He hopes that all of his art lovers would support him till his last breath. Since birth he couldn’t use his arms and his right leg for any movement. A feet artist who paints digital art & canvas painting. He was invited to speak at the recently held TEDx TughlaqRd event at the India Islamic Center. TEDx talks are regionally organised events that follow the spirit of TED events worldwide, which encourage powerful ideas and innovations that impact people globally. While working in the India, he was inspired by an artwork of Sobha Singh (painter) and claims to follow Sobha’s creative painting.

Even as it pours outside, the crowd trickles into a compact hall in Stella Maris College. The temporary gallery features large and small format works by four artists who are differently-abled. The paintings — almost nine of them — were sold even before the inauguration on Friday evening.

Organised as part of the International Day of Persons with Disabilities (December 3) by HEART BEAT Foundation, the show, titled ‘Never Say Die’, features the paintings of R. Udayakumar, who, due to spinal muscular atrophy, can only use his right thumb and index finger to paint; K. Narasimhalu, who had cerebral palsy in his childhood; Suvedha Ganesh, who is speech and hearing impaired; and Uttam Kumar, who has only one functional foot, was born in Jammu, India. 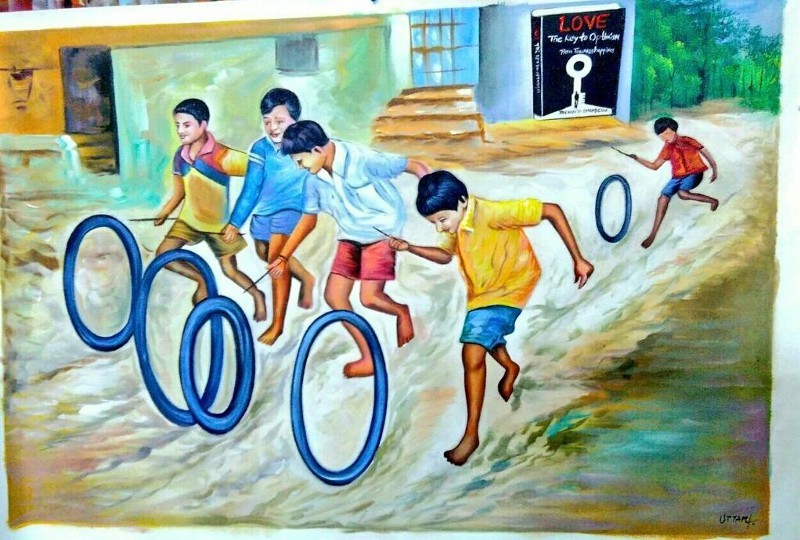 Painting On Childhood theme by Uttam

Uttam became the first feet artist as a part of the Host panel in International Day of Persons with Disabilities (December 3) by HEART BEAT Foundation national exhibition event 2016, also he is a member of MFPA since 2015. The exhibition ‘Never Say Die’ concludes on December 3, 2016.